Our friends at Hey Tiger are pretty special.  Not only do they create some of the most unique and delicious chocolate we’ve ever had the pleasure to get our hands (or mouths) on, but Hey Tiger is run as a social enterprise, producing ethical chocolate, handmade in Melbourne, with a portion of every sale going direct to the charity, The Hunger Project.

This month we’re not only collaborating with the amazing team at Hey Tiger to pair their amazing choccies with some of our spectacular vinos, but we also had the opportunity to chat with founder extraordinaire, Cyan Ta’eed about producing locally, creating unique chocolate flavours and the process of making the incredible leap from tech titan to chocolatier in one fell swoop…

Cyan is the founder at Milkshake.app, Hey Tiger, Envato & New Day Box. She also sits at the top of Australia’s richest woman under 40 list.

Hi Cy!  We are so incredibly honoured to be collab-ing with you this month!  Can you tell us a bit about your backstory?  Where did the first spark of an idea for Hey Tiger come from?

I started out as a graphic designer and started a technology company in 2006.  I’d been working on that for about 12 years when I had a health issue come up.  It made me realise that if I wanted to do more with my career, then it was important to start doing it now.

I knew that I wanted to do something that was targeting women, that was a social enterprise, and that was a physical product – other than that I was really open to anything!

The idea of chocolate kept on coming up, and more and more I became convinced that there was a real gap in the market in the chocolate industry in Australia.

So you had always planned for it to be a social enterprise?  From the very beginning?

I really did want to do a social enterprise from the very beginning. As Envato scaled, what I found really interesting was the impact that it was able to have on its community, even as a traditional commercial business.  I feel really strongly that businesses have to be a force for good in the world and that’s more important now than ever before.

Do you have any advice for young entrepreneurs perhaps wanting to follow in your footsteps?  Top tips?

What I always tell people that want to become an entrepreneur is that they don’t need to quit their job, just start doing what they can in their spare time; start a little idea, make it and put it out in the world, it doesn’t need to be ​‘the’ idea. An entrepreneur will have hundreds.

Envato was my third business and Hey Tiger is at least my tenth, so I’ve had a huge amount of practice, and I think every time I do it I get stronger and stronger.

So who develops your unique flavours?  What’s the process behind it?

It really is a collaborative process. (Our team) comes together every week and we shop ideas around. It can be a new ingredient that we’ve come across, or a new flavour combination we had in a dessert the week before.

The really fun part of our jobs is that then we get to play!  Generally speaking, any chocolate you see come into the Hey Tiger range, is usually the 20th iteration of that particular recipe!

Our general metric of success is when we just can’t stop eating it, we know we’re on to something!

And what’s the story behind your incredible packaging?

As an ex-graphic designer I truly was the client from hell!  When I began working with designers, I had strong opinions and really wanted them to push the boundaries, and would send back designs again and again.

Throughout all this I kept on chatting to an incredibly talented art director, friend of mine, Mirte Van Der Lugt and I just felt like Mirte intuitively got it.  She really has made it into something more than I ever could have imagined. She is tremendously talented and the brand and the packaging you see all comes from her beautiful brain.

So what do you say to people who think your product is “too expensive”?

Chocolate has got some major issues. The average cocoa farmer earns 73 cents per day and there are 2.2 million children in child labour in West Africa, where the majority of the world’s cocoa comes from.

So our cost of goods (the amount we pay for our ingredients) is among the highest in the industry and we are making a charitable donation for each bar sold.

Our product is for people who want a really incredible food experience, and are happy (and in a position) to pay an amount which will ensure that everyone in the supply chain is paid fairly.

Your Social Media and Marketing are A+++!  Was this a big part of the vision from the beginning?

Why thank you!  One of the things that really interested me about a chocolate brand is that even though women are the largest purchasers of chocolate in Australia, it’s all marketed to children or parents.

I really resonated with a quote from Emily Weiss, (founder of Glossier), who said that she wanted to make a brand that people would want to wear on their t-shirt. I love the idea that somebody can really become engaged in Hey Tiger just because it’s a really cool brand and they love the product and then find out later that it’s a social enterprise as well.

That, to me, is an interesting thing to try and do.

What’s next for Hey Tiger? Do you have any crazy ideas in your back pocket?

We have a huge number of limited edition chocolate bars coming out and a bunch of collaborations that we’re really excited about! I do tend to be a bit of a leaky bucket, and I’ve been told that I can’t talk about them…yet!

Now – on to the really important stuff…  What’s your favourite wine and chocolate pairing?

We did a mulled wine jelly in dark chocolate last year and it really blew my mind. It was the idea of our lead Innovation Chocolatier, Jessica Rapley, and it was absolutely amazing!  We actually did a limited edition run of the bar recently for Gewürzhaus because people couldn’t get enough of it!

And finally – Which 5 people (living or dead) would you invite to your dream wine and chocolate party?

1 + 2. Definitely Barack and Michelle Obama because I just have a huge crush on the two of them!
3. Theodore Roosevelt because his life was incredible and he seemed unbelievably wise.
4. My husband (Collis Ta’eed) because he is the best (and he would be super irritated if I didn’t bring him to dinner with Michelle and Barack Obama).
5. And Ali Wong because she is hilarious, and I think Barack and Michelle would find her funny.

A huge thanks to Cy and the whole team at Hey Tiger for being an absolute pleasure to collaborate with.  Is it wine and chocolate o’clock yet? Want to try it out for yourself? We have an exclusive offer for you from Hey Tiger for a  free mystery mini bar with no min spend (limit one per customer).

Use the code 6FTWINE at the checkout to redeem. Which expires 31 August. 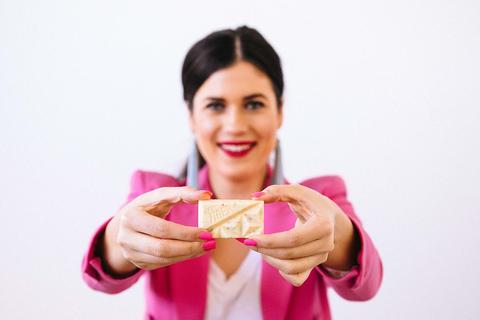 Our Favourite Christmas Memes It *is* the most wonderful time of the year!  And 2021 has been ripe pickins for the wild world of primo memes. via GIPHY It’s been… 6Ft6 at the Portsea Polo The sun was out (a balmy 26 degrees), the white dresses were in full force among the 5,000 strong crowd. The line was growing for a… Want to work at a fun and growing company? Work on a vineyard at our family owned business. We are heading in to a big year, and would love you… The best bar cart finds – from budget to blowout! Nothing says glamour and sophistication quite like a well stocked bar cart (or drinks trolley – whichever you prefer).  Perhaps your… At Natural Supply Co, we love devouring a great book as much as we love finding the perfect lipstick; especially with a great glass of wine in hand! There is…